Beech leaves form a mosaic to make best use of the sun’s energy falling on them. At this time of year they take on a wide range of colours from greens, through acid yellows to russet. The other thing to note is the buds are already on the tree in anticipation of the spring, still five months away.

Another picture from my last trip to London. The low angle of the sun makes for very contrasty photographs, particularly when you deliberately shoot into its reflection on the canal. The canal basin at Little Venice is beyond this bridge.

These sculptures are by Sean Henry and stand beside the Paddington canal basin, close to the railway station. They were installed in 2004 and are cast in bronze, with oil paint finish. They are slightly larger than life-size.

I came across them on a winter afternoon’s walk, which meant that the statues were in flat shadow. I took two crops from the original photograph, each of which has a different sense of space and relationship between the two figures. END_OF_DOCUMENT_TOKEN_TO_BE_REPLACED

I’ve been having a wee ranty thing on Twitter about the SNP’s recently-published white paper on an independent Scotland. Peejay (@peejaydee70) has challenged me to explain my thinking a bit more, so Peejay, this post is for you.

The process will fail Scotland

We are offered a binding referendum on the question of whether or not Scotland should be an independent country. That’s it. Everything else that really matters – what the constitutional and economic settlement might be, is unknown. Even when those matters are known, the people of Scotland will have no say in whether or not they are acceptable to them, or whether they can be satisfied that the settlement will result in a modern European nation in which everyone can flourish, both socially and economically. I am generally opposed to buying a pig in a poke, and by the time the cat’s let out of the bag, it will, of course, be too late; the deal will have been done.

Failure to establish a secession process whereby any constitutional settlement has to be put to the people who must live under it is fundamentally flawed and shows contempt for the intelligence of the Scottish people. It is also perilous for our negotiators and the nation. If the referendum is in favour of independence, then our negotiations will be in the hands of politicians for whom independence at any price, rather than the best possible outcomes for the people of Scotland, will be the priority. We’re not going to have a strong and authoritative place at the negotiating table if those representing us look like drowning men who would settle for a box of matches rather than hold out for a lifeboat. Scotland’s negotiators will have more power if they can assure the other parties that any settlement must be acceptable to the people of Scotland in a final referendum.

There are many examples of nations gaining their independence without settling such fundamental constitutional matters first, but what’s at stake is actually too important to leave until later. The SNP promise all sorts of things about our currency, borders, citizenship, trade freedom, membership of the EU (not automatic), structural debt and so on, none of which can be known until formal negotiations are concluded. That’s the time to put the formal question to the people, rather than promising everything without evidence and dressing up a party manifesto as the constitutional arrangements for a modern democracy.

I am a proud Scot, but I will not be bought or sold by a parcel of rogues without knowing the price of my head.

This impoverished vision is for a medieval society instead of a modern secular republic.

The SNP have a long and unsavoury track record of sooking-up to priests, princes and popes which does nothing to challenge the unwarranted privilege of religion and kings in our society. The white paper demonstrates the failure even to conceive of a modern European democracy by promising to retain the Crown and the place of religion in Scottish society. Instead, we should expect a clear and bold vision of a new and different sort of Scotland, rather than fossilising these archaic and unequal privileges in any new settlement.

The whole process of selling independence has been on the basis of finding the price of Yes votes, rather than the intrinsic value of independence itself. This is because Alec Salmond is an inveterate and consummate politician, not a statesman like Donald Dewar. I would that Donald were still here and leading this process. The SNP’s vision fails for me on two major grounds:

Firstly, the politicians want to keep a monarchy in Scotland. Apart from the mediaeval anachronism that is having a magical parent to an infantilised population, I have no desire to be someone’s subject, least of all to woo-believing, tree-hugging foreign loon. As a humanist, I no more wish to bow my knee to a human demi-god than to the fantastic imaginings of an iron-age sheep-herding patriarch.

Constitutionally, keeping the English crown poses serious issues – do the people have the power to rule themselves through their elected representatives in their own parliament, or do we cede powers to some manifestation of royal prerogative with secret and unaccountable privy councils making the decisions that affect our liberties? And how do we protect our independence when we involve the foreign court of a foreign king in our most intimate political decisions?

The second impoverishment of vision is that the SNP are committed to retaining the pernicious influence of kirk and church in a new Scottish society, perpetuating the sectarianism and division that causes such fundamental harm in Scotland today. This is a determination to embed the infrastructure of division into our constitution. The influence of the church in Scottish public life is deeper and more pernicious than I had ever realised before I came back to live in Scotland some nine years ago. For instance, all councils are obliged to appoint three church representatives to sit on their education boards, and many councils actually permit these religious appointees as members of full council as well, a fact which would horrify most secular Scots.

Secularism is ensuring that no religious party is privileged in law or the practice of government, at any level in a state. This protects the interests of all religious groups and ensures that none are disadvantaged by privileging another above them.

The educational apparatus at the heart of our sectarian division is promised to be continued. Denominational schools would continue unabated in an independent Scotland. In other words, publically-funded schools will continue to indoctrinate their own particular brands of religion to children as young as five and six, acting as incubators of sectarianism and division for the next generation. State-sponsored bigotry has no place in a society which strives to secure equality for people of any religious persuasion or of none.

The Scotland I would like to see would be a secular republic, not one in which priests, ministers and moderators have hold of longer levers of power than even they do now.

It is for the proposer of a motion to make the case why their argument should prevail. Similarly, the customer is under no obligation to buy, no matter how oleaginous the salesman. Many enthusiastic supporters of the Yes campaign would like the un-persuaded to make the contrary argument, forgetting that it is the failure of their own case which requires the greater scrutiny.

It has been said that this is the opportunity of a generation and, if we don’t grasp independence now, then it won’t come our way again for a long time. That may be so, but we always have now the opportunity to build a fairer, more just and more secular society through our existing institutions; the Scottish Government appear determined to embed injustice and inequality in independence. I would rather know that I’ve got a chance to fight for a secular Scotland in the Union than know that religion is to woven into the rip-stop fabric of a new constitution.

Peejay, you probably won’t agree with much of my argument, or even my conclusions, but I hope this gives you a bit of an insight into my thinking. I am persuadable, I just wish there were statesmen fighting for the cause of Scotland who could make me believe their vision. 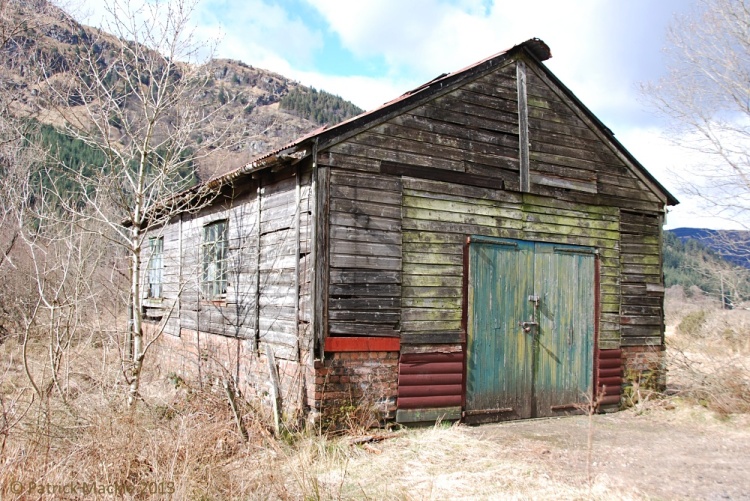 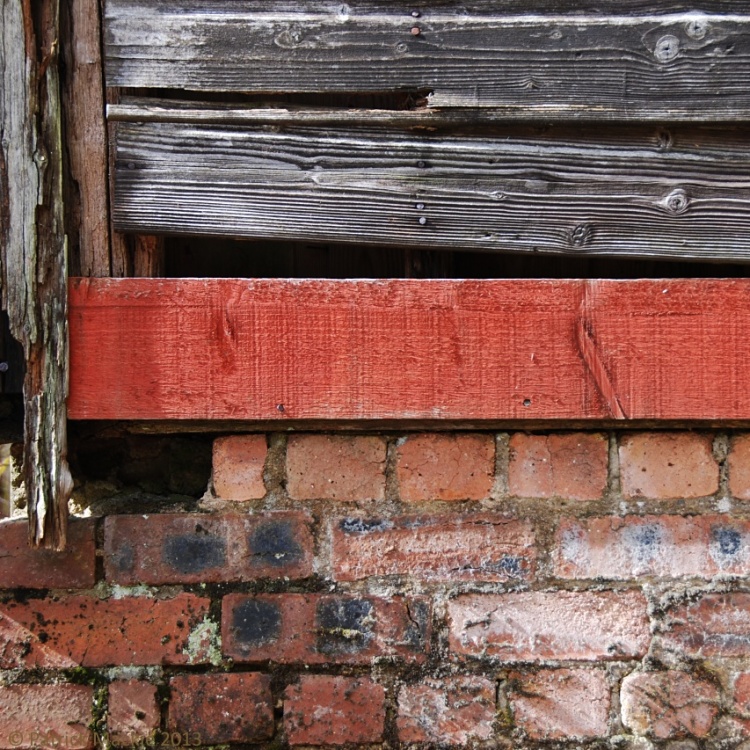 This photograph illustrates the contrasting materials that have been used over the years to build, and then repair, this shed at the head of Loch Eck.

A crop of one of the door hinges rotated, to show the contrasting materials and the effects of weathering on them. 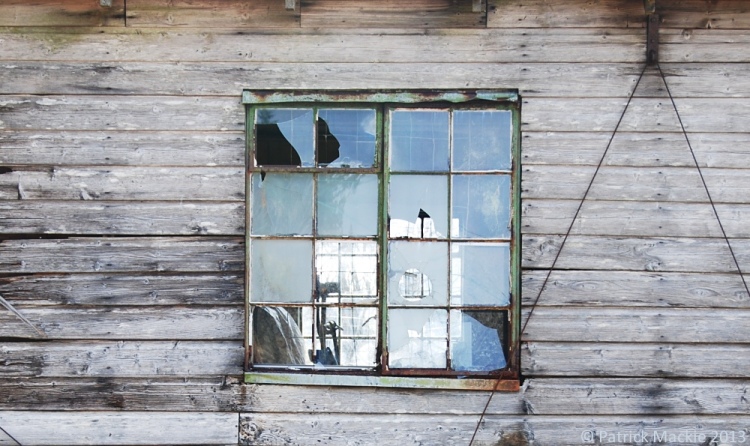 Another window from the shed at Cambusdhu – the Black Bay – at the head of Loch Eck. The wires that run diagonally across the wall hold the roof down. I like the weathered materials, the evidence of old repairs and the sense of not-quite-dereliction that comes from this structure.

A window from the shed at Cambusdhu.

This shed lies beside the road to Dunoon at a place called Cambusdhu, or the Black Bay, at the head of Loch Eck. I took a series of photographs of it back in April, which is why the light and the vegetation look so unseasonal now.

The next few days will feature some more of the building elements.