Windmills on the saltings north of Marsala, Sicily.

A hand-made door handle in Erice, Sicily, which to me illustrates the craftsman’s pleasure in making objects that are both useful and beautiful. 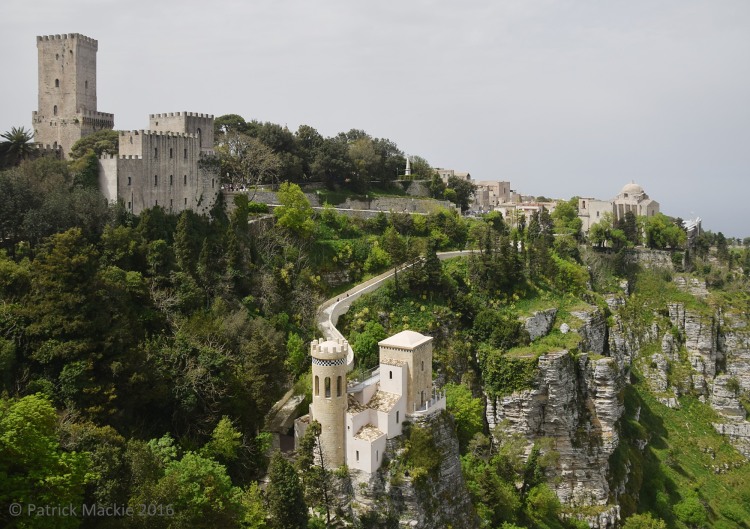 This view of the eastern flank of Erice was taken from the wall of the Castello di Venere (Castle of Venus). The spectacular cluster of turrets in the foreground is the Torretta Pepoli, restored in 2014. The basilica on the right is the Chiesa di San Giovanni Battista.

There’s been a bit of a stooshie in some of the social media arenas into which I dip an occasional sceptical toe. The news item that has been stimulating debate is the report in the UK Daily Mail newspaper of a curry house manager who was prosecuted for food safety offences. But what caught the xenophobic imagination of the press was the implication from the prosecuting local authority that a bottle in the kitchen was contaminated with faecal matter because it was used to carry water to the toilet for personal cleansing after defecation. And this must surely mean that the chef in question actually prepared food after defecating and cleaning himself, which is the worst offence of all.

Once I did wipe me with a gentle-woman’s velvet mask, and found it to be good; for the softness of the silk was very voluptuous and pleasant to my fundament. Another time with one of their hoods, and in like manner that was comfortable. At another time with a lady’s neckerchief, and after that I wiped me with some ear-pieces of hers made of crimson satin, but there was such a number of golden spangles in them (turdy round things, a pox take them) that they fetched away all the skin of my tail with a vengeance.

Frankly, the response to this story is racist self-justification of the worst sort. I doesn’t matter that the chef in question was convicted of food safety offences. What mattered to the gutter press was that he was dark-skinned, of Indian heritage, had the name Chowdhury and was bad enough to clean himself after defecating.

There is no need of wiping one’s tail, said Gargantua, but when it is foul; foul it cannot be, unless one have been a-skiting; skite then we must before we wipe our tails.

Now, this sort of thing fills the British with horror. After all, poo is dirty, nasty stuff and you never want the merest trace on your lilywhite fingers and, after all, we’ve got toilet paper so we don’t have to make the choice of washing or leaving unwashed in the absence of wiping. Surely only the heathen races of darker hues would ever dream of actually washing their bottoms after having a Donald? Even the French managed to invent the bidet, although that is equally foreign and unsettling to the chauvinistic Anglais mind.

Afterwards, in dunging behind a bush, I found a March-cat, and with it I wiped my breech, but her claws were so sharp that they scratched and exulcerated all my perinee. Of this I recovered the next morning thereafter, by wiping myself with my mother’s gloves, of a most excellent perfume and scent of the Arabian Benin.

The report from the court is clear. Mr Chowdhury did use the bottle found in the kitchen for personal cleansing and did perform his ablutions with his hands. Frankly, so what? The council raised reasonable concerns that the bottle was refilled at the kitchen sink, which obviously has the potential to contaminated food preparation areas with faecal bacteria, which is a genuine Bad Thing. Most premises where this practice is carried out keep a discreet bottle in the loo itself for filling from the washbasin in the compartment.
The defence to the accusation was that Mr Chowdhury was following his own cultural practice in washing his backside with water using his hand. And he was. But culture is derived from locality and environment, and not from skin colour, family name or religion. The rather nasty backlash that I’ve seen to this story is seeking to associate the practice with Islam and muslims in general, leading to the inference that “these people” are dirty, don’t or won’t understand food hygiene and can’t be trusted to prepare food for white people. Frankly, that’s all balls.

After that I wiped me with sage, with fennel, with anet, with marjoram, with roses, with gourd-leaves, with beets, with colewort, with leaves of the vine-tree, with mallows, wool-blade, which is a tail-scarlet, with lettuce, and with spinach leaves.

My father told me many years ago that bacteria could seep through eight layers of toilet paper. I don’t disbelieve him. I wash my backside with water using my hands myself – in the bath or in the shower; sometimes I’ve even taken a poo immediately before said bath or shower. Everyone who doesn’t exclusively use a flannel glove at all times in the bath or shower is in the same category. I don’t consider myself unsuitable to be a food handler as a consequence.

Then with mercury, with parsley, with nettles, with comfrey, but that gave me the bloody flux of Lombardy, which I healed by wiping me with my braguette.

The use of paper for wiping faeces from backsides is a modern, western invention and isn’t that great at actually doing the job. I’ve been assured in the past by non-westerners who use water that they consider the western practice to be dirty and foul, because faecal matter can be left behind.

Who his foul tail with paper wipes,
Shall at his ballocks leave some chips.

Actually, the rise in the use of moist cleansing wipes suggests that we knew that all along, but were too priggish to admit it.

But, to conclude, I say and maintain, that of all torcheculs, arsewisps, bumfodders, tail-napkins, bunghole cleansers, and wipe-breeches, there is none in the world comparable to the neck of a goose, that is well downed, if you hold her head betwixt your legs. And believe me therein upon mine honour, for you will thereby feel in your nockhole a most wonderful pleasure, both in regard of the softness of the said down and of the temporate heat of the goose, which is easily communicated to the bum-gut and the rest of the inwards, in so far as to come even to the regions of the heart and brains.

My personal favourite material for the task, in the absence of a goose’s feathered neck, is moss, which combines the scrubbing and cleansing in one simple, natural facility. But you don’t get a lot of moss in middle-eastern deserts or the hot dry topics.

Personally, I don’t care how people clean their backsides, what matters is that they have good personal hygiene and clean their hands both after using the toilet and upon their return to food preparation duties. I’m not convinced that all the social media warriors who condemn Mr Chowdhury could necessarily say the same for themselves.

Note: the quotations are taken from Gargantua by François Rabelais, translated by Thomas Urquhart and Peter Antony Motteux. The direct source is https://en.wikisource.org/wiki/Gargantua/Chapter_XIII 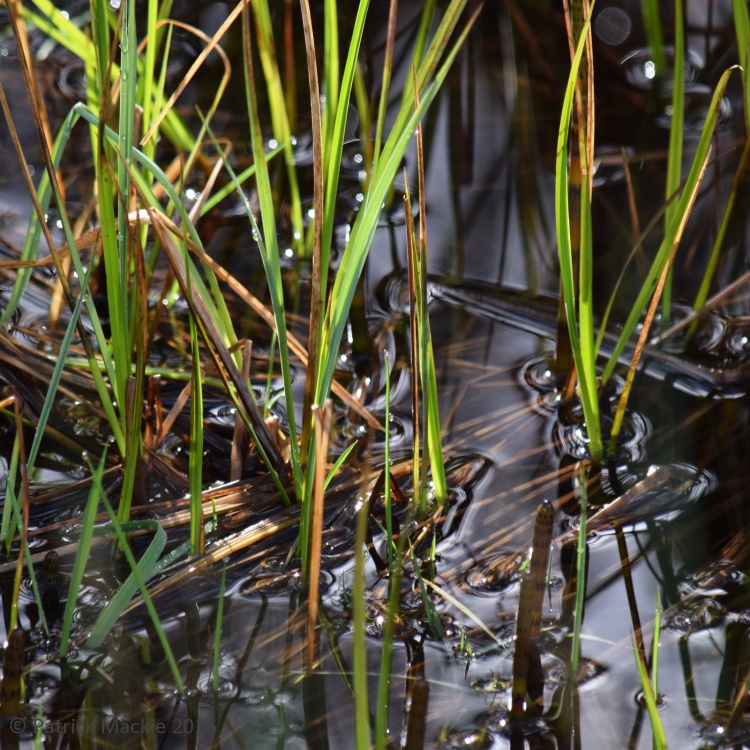 Another autumn, another winter, another spring. 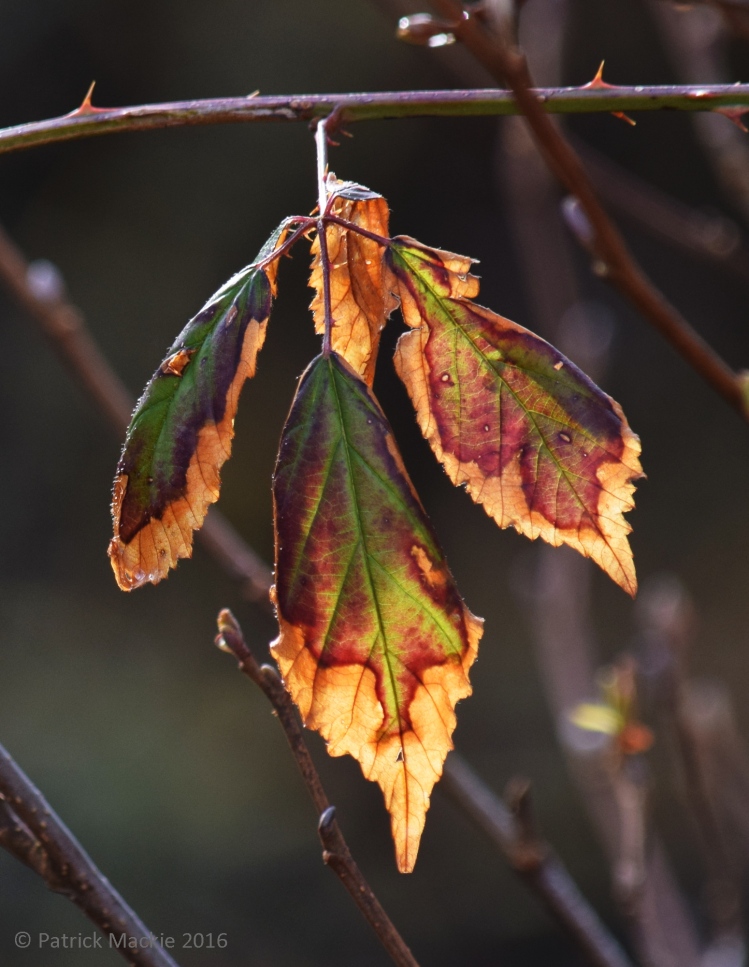 Another autumn, another winter, another spring.

The remains of last year’s reeds lie on the surface of a local lochan, with this year’s new shoots starting to emerge. Another autumn, another winter, another spring.

We’re in Sicily for a week or so. This grasshopper or cricket was laying her eggs on the drive in front of the house.

Reflections in a pond at the Botanic Gardens in Edinburgh.

Reflections in a pond at the Botanic Gardens in Edinburgh.