Last Sunday, before social-distancing rules really kicked in, H and I went for a walk down to the Dubh Loch in Knapdale, just to see what the beavers had been up to over the winter. Answer: plenty. Here are some photos of what was easily-seen and which shows examples of beaver signs for those who’ve not seen them before.

Yes, busy as as beaver is a thing.

Reinforced dam on the Dubh Loch 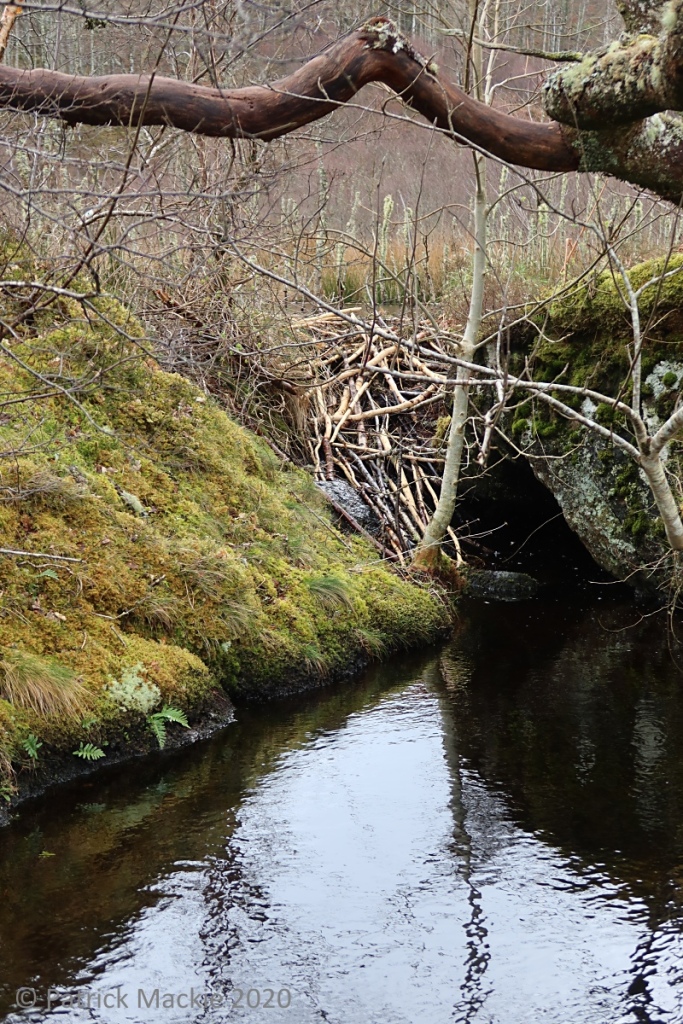 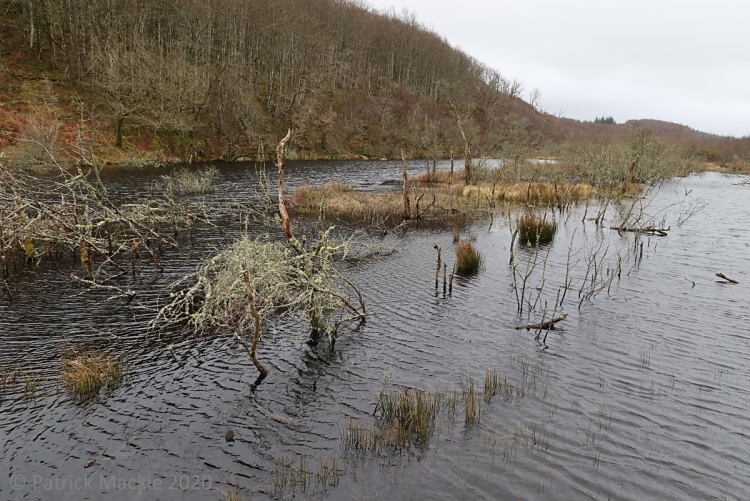 Beaver lodge on the shore of Loch Coille-Bhar. 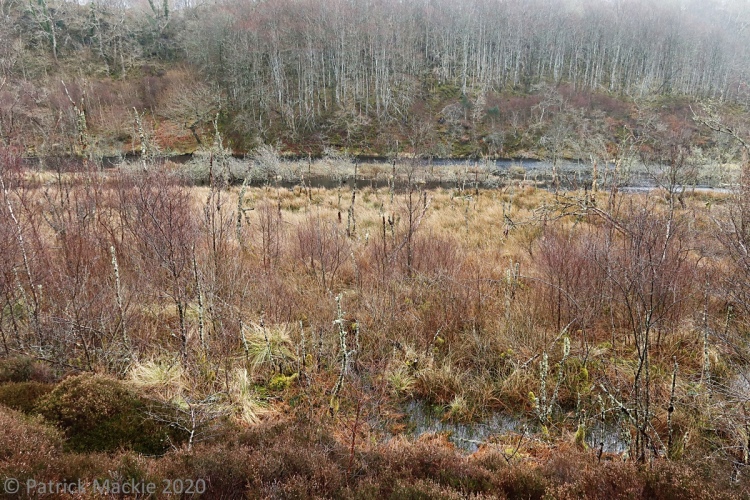 This whole area is flooded, or at least much wetter, than it was before the beavers dammed the Dubh Loch. Standing trees have died and are falling, opening the whole area up.

A tree felled by the beavers beside the track.

This ditch has been used by the beavers as a canal – in fact, it has been dammed further along to improve it. They’ve been feeding on some of the sticks here at the end of it.

A small dam on a ditch running away from the Dubh Loch. improving the canal above it. Note plenty of beaver sticks where they’ve been feeding.

Elsewhere in the woods, pools have been created by damming small burns. Sticks are laid lengthwise in the water and mud and other debris is pushed up behind it. The mud dam may yet be reinforced with more sticks. 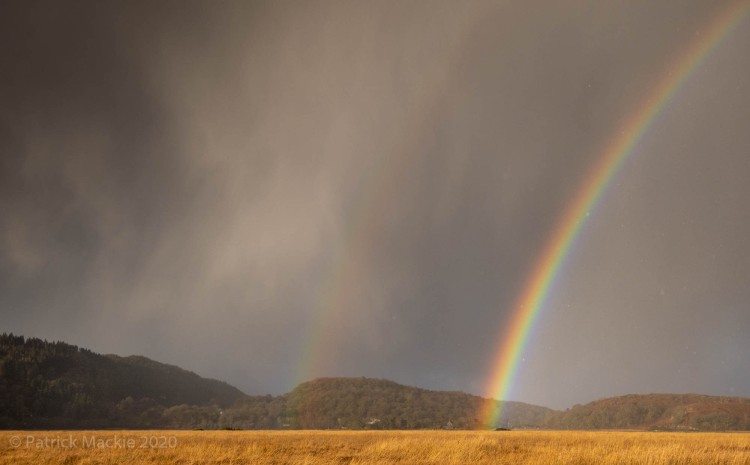 A squally day today in mid Argyll, with a stunning rainbow making an appearance when I drove across Moine Mhor.

This is a post that his been sitting in my drafts folder since 2015, in that strange inter-referendum period of British history when it was still possible to read the minds of people whose political views were divergent from one’s own.

[In the summer of 2015] I had the occasion to be at a large family gathering in the pleasant and leafy Home Counties west of London.

What characterised everyone was that they were all nice, decent people who were interesting to talk to, and interested to meet this strange creature from Scotland where, donchaknow, people seem to be restless under the British Crown. And this led to talk of why people could possibly contemplate independence and then, inevitably, to other political questions. And it turns out that many of these lovely people are Tories.

It was a conversation with – let’s call him Raymond – that set me thinking a bit about how we all look at the world. Raymond had spent his adult life in the army and was now long retired. One thing he said struck me, “I’d always vote for a party that supported the armed forces“. And this from a man over whose lifetime since 1945 the armed forces have been in a continuous state of contraction and reconfiguration. And spoken only five years since a Tory government scrapped Nimrod, the Harrier fighter and the seaborne air defence capability of the UK. And that’s not to mention compulsory redundancies in the services and closing all but one RAF base in Scotland.

Broken: a Nimrod lies in pieces after demolition work began on the aircraft at BAE Systems Woodford airfield in Cheshire Photo: BBC

So, is that what “supporting the armed services” means? I begin to think it’s not, because it patently can’t be. We have the smallest military, albeit with things that make more powerful bangs, than at any time in modern history. We have less capacity to project and sustain power across the globe than ever before and we cannot support our forces in more than one theatre at once. Rather, I think that supporting the armed services in this thinking means having the will to use them aggressively, because there’s very little else left it can mean.

And I think this gets closer to the point and closer to the thinking that binds together the conservatism that being a Tory means and the incredulity that there are people in Scotland who are so pissed off with Westminster austerity that they’d much rather be poor under an independent but accessible Scottish government than a remote and – to them foreign – Westminster government which seemed not to give a shit about the condition of ordinary folk. For many people in England, these are unthinkable thoughts, as is the idea that the Tories have not been supporters of the armed services since they won the 2005 general election. It’s the inability to get into other people’s heads and consider that there are many ways of looking at the world and, necessarily, having diverse and opposing conclusions about it.

Over the last few years, as my journey into humanism begins, I’ve learned a lot about the difference between having privilege and not having it. And I’ll be clear: I’m a white, middle-aged, cis-het male and with a public school education. That puts me clearly into the privileged bracket. It’s very easy for me to walk into a room and rely upon my physical characteristics and accent to get me through social encounters and to blend in with other, apparently similar, people, but I know that for the vast majority of even my countryfolk, this isn’t the case. 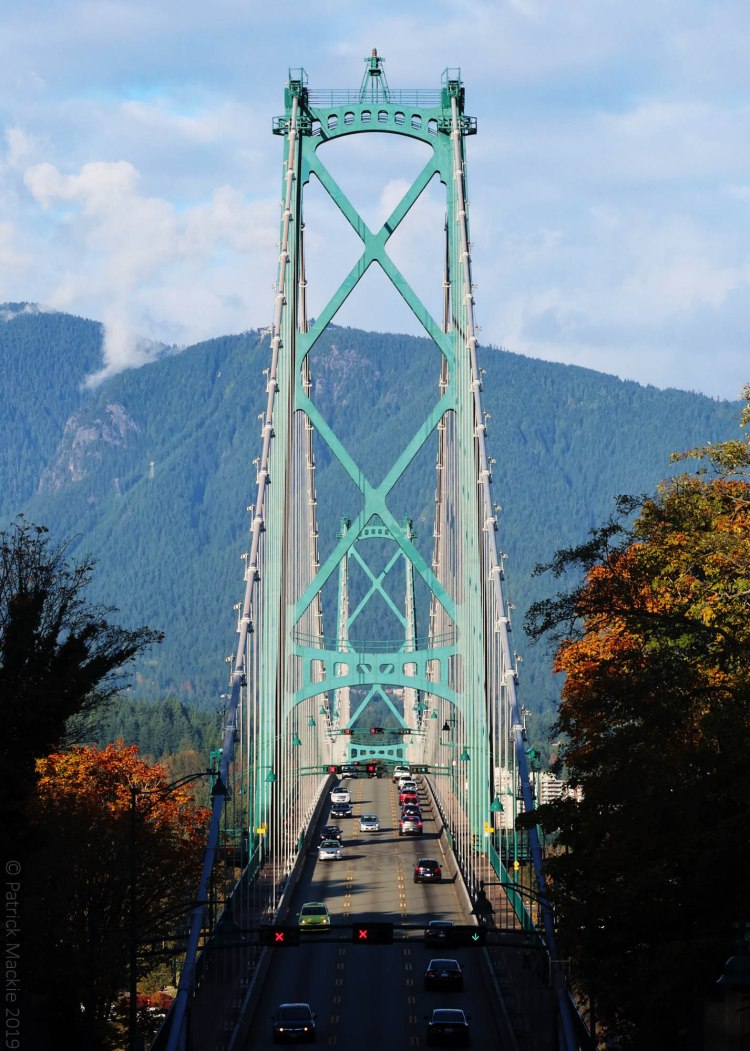 The Lions Gate, or First Narrows Bridge, over the Burrard Inlet in Vancouver. More information here (Wikipedia), if you care.

It’s almost as if the businesses of Granville Island go out of their way to get photographed.

I’ve recently spent a fabulous couple of weeks in Vancouver, on Vancouver Island and up in the interior of British Columbia. Visiting family was the whole purpose of the trip, but I managed to point the camera at a few things of interest.

This is the facade of the Sylvia Hotel, one of Vancouver’s heritage buildings. Cousin R and I dropped in for cocktails (nah, beer) while we were there.

Taken from the wee Foyle Ferry on the crossing from Greencastle to Magilligan on a recent visit to Inishowen.